Stability under alkaline and acidic condition
MMB is stable at high and low pH.
Evaporation profile
Evaporation rate can be controlled with MMB.

Detergency of a stain with four different detergent formulations was checked.

Four detergent formulations were prepared with different solvents.
The difference between them was just solvents and the other ingredients were fixed.
Black stain was applied on white plate.
Cleaning performance was checked with Multi-track scrub tester.

Detergency of marker line on glass with solvents was checked.

→ MMB has synergy in detergency with hydrocarbons such as d-Limonene.

Glass plates drawn lines by permanent marker (black and red) were soaked in beakers filled with MMB, d-Limonene and Mixture of MMB and d-Limonene individually. After 10 minutes agitation at room temperature, detergency was checked. 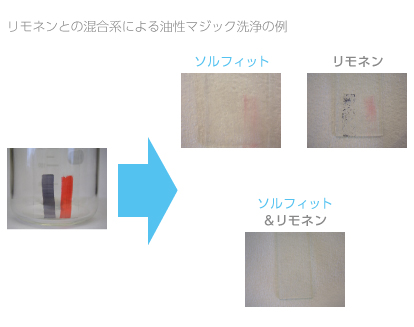 Damage to plastics by solvents were checked.

→ MMB has milder effect on resins than glycol ethers.

Plastics were soaked in each solvent for 7 days at 50℃(122℉) and degree of swelling were measured.

Damage to PMMA resin by mixture of MMB and water were checked.

→ Damage to PMMA resin can be controlled by water.

Mixtures of MMB and water of different ratio were prepared.
PMMA test pieces were soaked in the mixtures for 7 days at room temperature and appearance was checked.

Viscosity and appearance of concentrated detergent formulations were checked.

MMB based formulation is low in viscosity and high in stability at low temperature.

Four detergent formulations were prepared with different solvents.
The difference between them was just solvents and the other ingredients were fixed.
Viscosity of them at room temperature and appearance of them at 2℃ were checked. 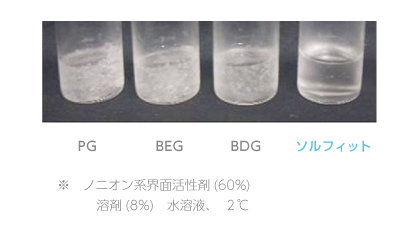 Stability under alkaline and acidic conditions

Stability of solvents at pH 10 and 4 were checked.

→ MMB is stable at high and low pH.

Solvents and Buffer solutions were mixed.
The mixture were stored in an oven at 50℃ for 4 weeks.
Appearance and purity were checked. 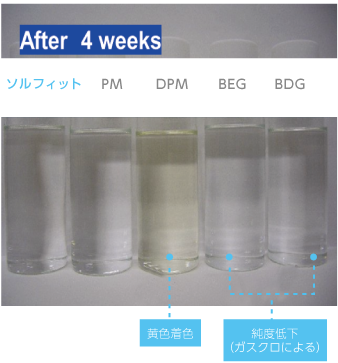 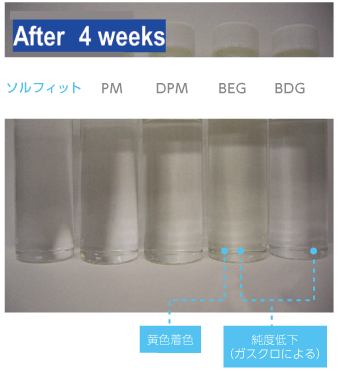 Evaporation profiles of solvents were checked.

→ Evaporation speed can be controlled by adding MMB to water and other solvents. 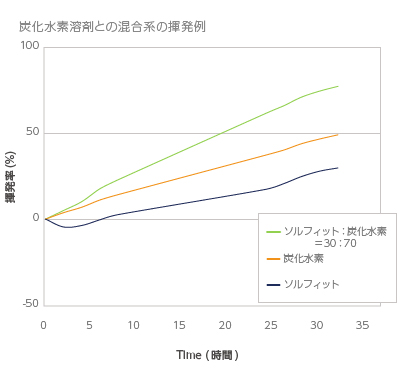 All experiments in this page were performed at Kuraray except for the test of detergency.