MMB contributes to stabilization and long lasting of fresh scent
of air freshener due to following characteristics of MMB:

Evaporation profile
Evaporation speed can be controlled and less variation of composition.
Co-surfactant effect
Less surfactant for water based formulations

Odor of MMB is less than that of glycol ethers.

Test method
Mixtures of each solvent and water were prepared (conc. of solvent : 0-20 weight%) and the odor of them were checked. 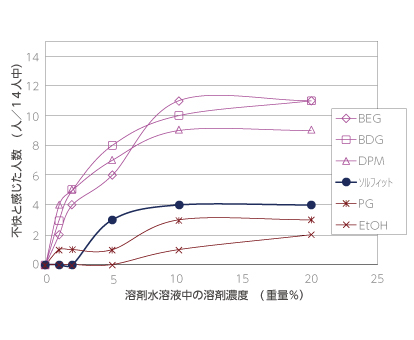 MMB is high in compatibility with wide range of aroma chemicals compared to glycols such as DPG.

Test method
Solubility of aroma chemicals in solvents was measured at 22-24℃.

Vapor pressure of aroma chemicals and solvents were plotted. 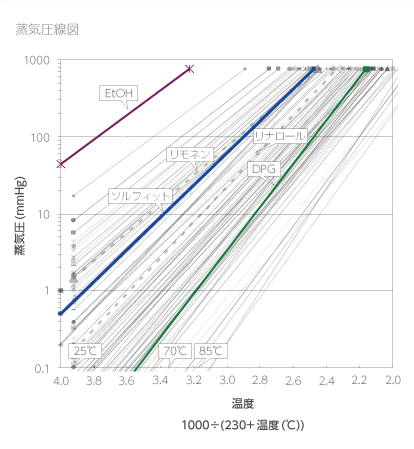 Evaporation profile of mixture of MMB and water was checked.

Evaporation rate can be controlled with concentration of MMB.
Long lasing of fresh scent can be achieved because of stable composition during the evaporation.

Test method
Mixture of MMB and water (200g) were charged to a beaker (300ml).
Evaporated them at 25℃ and weight and component were measured.

Evaporation profile of solvents in different humidity was checked.

Solvents were charged to petri dishes for each and evaporation profile of them were checked.

Test method
Solvent (5.0g) was charged to a petri dish (9cm in diameter).
Evaporation profile, weight loss, were checked under the condition of 22-23℃ and 30 or 40 in humidity.

MMB as a co-surfactant

Water based air freshener was prepared to check performance as a co-surfactant.

Only MMB system was transparent and MMB works as an efficient co-surfactant.
→ Cost reduction of surfactant
→ Less clogging on wick because of surfactant

Test method
A water based formulation of air freshener was prepared
(Ingredients: water, surfactant, fragrance, solvent, etc.)
Three air freshener samples were prepared with MMB, DPM and Ethanol as a solvent for each.
(The formulation except for solvent was fixed.) 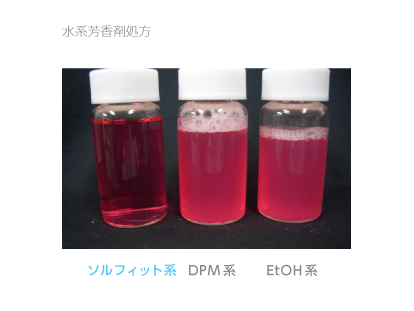 All experiments in this page were performed at Kuraray.